On Thursday the 13th of September it was the wonderful Clara Wieck Schumann’s birthday and what better way to celebrate her life and work than attending a brilliantly timed concert in the National Concert Hall filled with the work of romantic-era women composers?

It is also Emer’s birthday soon (coincidence?) so as a present I booked tickets. The event was in the John Field Room and I was delighted to see a good crowd in attendance for a weekday lunchtime concert. It was still disappointing that it was not at a time where people who work Monday-Friday could come and hear the music.

The concert was put together in conjunction with the “Women of Note” series which is currently being broadcast on RTE Lyric FM. Elizabeth Pink, the contralto, was today’s singer and she was accompanied by Anthony Byrne on the piano. The day after this concert they were due to perform another song recital in the Royal Irish Academy of Music at the 2nd Women and Music in Ireland Conference.

The recital focused on women who composed in the 19th and 20th centuries. It opened with two songs by the Northern Irish composer Dr. Annie Patterson (1868-1934). Annie was all kinds of awesome as not only did she found Feis Ceoil but she become the first women from the British Isles to receive a Doctorate in Music. The two songs that were played were The Skylark and At Parting. The Skylark had a strong Irish lilt and a shimmering piano accompaniment which mimicked birdsong, whereas At Parting which is about “a love that is hopeless” was sad and urgent. Next in the spotlight was the one of the blog’s favourites, Clara Wieck Schumann (1819-1896). As mentioned above it was her birthday the day before the concert and this was not mentioned was a bit surprising. They did describe her as a brilliant composer, who was married to Robert Schumann and had lots of children. Poor Clara is doomed to forever be mentioned in the family context, unlike her husband. An example of this bias can be seen their Google doodles, check out Clara’s, then see Robert’s. Her top ten facts were a bit crap as well, she was born, played some music, married Robert, had babies, he went off to an asylum and she died. If you want to see a better description of her life and achievements check out Emer’s piece which is much more informative.

But I digress back to the music! Elizabeth and Anthony performed four works by Clara, all of which were packed with emotional intensity. Ich stand in dunklen Träumen is a song about loss and Sie liebten sich beide is about a love kept secret until it was too late. Both songs ebbed with pain and sadness. After this they performed Liebst du um Schönhelt. This is another love song with beautiful ending lines. In this song she asks that if you love her, do so for her alone. To finish her section Warum willst du and’re Fragen was played which again is a very intense piece about love, trust and questioning. I have a real soft spot for sung German and these songs were fine examples. I was jealous to hear that Clara visited Ireland on one of her tours, wouldn’t it be great to have a time machine? 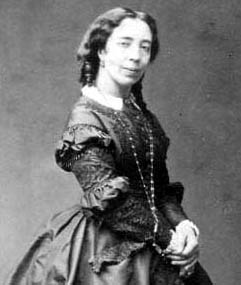 After Clara, two of Pauline Viardot’s (1821-1896) flowery works were performed. Pauline was a Parisian singer and composer of Spanish decent. Born into a musical family she was surrounded by talent and support and she definitely made the most of it. Although she never intended to become a composer, her works were of such quality that they cannot be ignored or discounted. First we were treated to Les Deux Roses a lively, fun tune about a timid lover and flowers of love with an intoxicating scent. The next song was Fleur Desséhée a song which perfectly captured the essence of French sytle heart break, like something out of an old black and white/silent movie. I wanted to jump onto a place and escape to Paris so thanks for that Pauline!

From France we returned to Germany to hear the songs of the talented Fanny Mendelssohn (1805-1847). Fanny, like Clara, has the (mis?) fortune of being related to some very famous men such as her brother and composer, Felix Mendelssohn. Poor Fanny had to not only do battle with negative societal attitudes towards women and music but also those of her father, who is said to have tolerated rather than supported her musical talent. Felix even warned her against publishing works in her own name as it would distract from her more “important” duties.

Despite this Fanny composed some great pieces and four of these were performed at the concert. Most of these were parlour pieces, beautiful and finely tuned. Das Heimweh is a song about homesickness and this song could easily be included in a musical today, its melody was so fresh and strong. I could even follow the lyrics despite not speaking German. Sehnsucht was a softer, haunting piece about longing which used wonderful imagery of a far away dance to portray the emotions. When composing Verlust Fanny used some truly elegant chords and combined then with a rich melody to weave an image of loss.

The highlight of the set however, was Italien. This is a happier tune which describes the beauty of Italy and has a great anecdote about once of its performances. Queen Victoria was a big fan of the Mendelssohns and invited them to her palace for a gig. The Queen was quite partial to some singing so she performed this song in front of her guests in her parlour. When finished, she turned to Felix to compliment his wonderful composition and he had to inform her that it was in fact Fanny who crafted the piece. Fanny was also in the room at the time but I am sure Felix would have owned up regardless.

The next composer featured was Mary Plumstead (1905-1980) who spent most of her life in Devon and Cornwall. Despite living to 1980 Mary never really came to prominence in her life time and is still little known. This is despite many of her songs becoming central pieces in many choirs repertoires. Mary’s songs were religiously inclined and both songs that were performed as part of his concert mentioned a God. On Jacob’s Pillow had a wonderful selection of lyrics as well as an almost Disney like ending and Close Thine Eyes was a soothing, lullabyesque composition. I was very relaxed after these two songs.

Not to be outdone by the Germans another Paris native had two songs featured this afternoon. Cécile Chaminade (1857-1944) was a composer of salon songs and piano pieces and was, unlike Mary Plumstead, published frequently. She was awarded the Légion d’Honneur which was a first for a female composer. It was not all easy going for Cécile though as her father disapproved of her career and she become more obscure as the 20th century winded on.

Of all the songs performed in this recital I think that Cécile’s had the most gorgeous lyrics.  Bleus featured magic, bewitching eyes, lakes and the sky all accompanied by a chilling, spooky piano. Songs like this make me wish that I listened more to my French class in school. Si j’étais Jardiner des cieux is a love song that is gentle and winding, much like the French tunes that I have come to know and love. We will ignore the bit about culling stars as I am sure she did not mean to murder them.

The concert ended with two songs from an Irish woman, Alicia Adélaide Needham (1872-1942).  An ex-student of the Royal Irish Academy of Music, she was a household name until the early 1920′s due to her sheer amount of talent. Her name then faded into obscurity and I am delighted to see some efforts are being made to preserve what we know about her and to spread her music. The songs we heard today would not have an unfamiliar sound to anyone who is familiar with Irish ballads. Glenara is a song about what goes on in a particularly beautiful place, I am also very impressed that she managed to rhyme “Glanara” with “arrow”. Husheen was performed next and like the name implies it was a soft, flowing tune which faded out to finish. Great stuff.

This was a great recital and I am very glad that I took the time off to attend. I learned a lot more about these women and their works and am delighted that this showcase was held in a venue as great as the National Concert Hall. Yes it was not in the main hall, but it is a start, and the more these works are played hopefully they will become more popular and in demand. The programmes that were provided were excellent as they contained the translated lyrics for the German and French songs. I would have liked the original language to be included beside it so I could compare but it is a small complaint for what was a great concert.

You can see that some of the songs above do not have links. This is because I could not find any. If you know of where I can find them I would be happy to include them so please let me know.