Sitting there watching the opening of the Ubisoft presentation, Emer our contributor goes, “isn’t this nice and understated, not like the EA one at all”. The second she finished that sentence Jerry Cantrell of Alice in Chains fame, walks onto the stage and starts rocking out. Oh well.

But you see this was very clever as it was not just an opening but an introduction to….

The purpose of Rock Smith is that it teaches you how to play real instruments as opposed to bashing buttons like Rock Band. It seemed pretty cool and Jerry was definitely rocking out. I think the game would definitely encourage budding rock stars, who are also gamers, to practice and maybe learn a thing or two. You can also dress up as your favourite glam rock star and play their tunes all in the comfort of your own home.

Black is the new black

Sam Fisher returns this August. New co-op missions will be available as well as the popular spy vs merc multi-player. Oooh that is a tough decision, spy or merc? Worse than Daddy or Chips.

Again I was very impressed with the style of the game. It was dark, gritty but sleak and stylish. It could be a lot of fun but I am not sure if it adds many new elements to the franchise.

All the gang together (minus Rabbids)

Now onto something totally different. Another old buddy Rayman is back, trying to claim back his fame and glory from those ridiculously annoying and successful Rabbids.

Opening the trailer is a Viking lady (who has a bit of a look of Merdia about her) fighting baddies. She is kicking serious ass but dear Lord Ubisoft what is with her ridiculous bouncy boobs? It was hard to try and ignore them to be able to see the rest of the trailer. Maybe you should get with Konami and discuss how not to do this.

But aside from that silliness, the Viking lady continues to fight her way through the land until she rescues Reyman from a gang of evil frogs. It is vivid, colourful and cartoony, and should be a lot of fun to play. Not a Rabbid in sight! The levels also looked like great fun to play and I was quite impressed with the art work.

Play wise there are competitive multi-player modes, big boss battles and there are even musical maps.It just might be enough to give Reyman another shot.

The Mightly Quest for Epic Loot 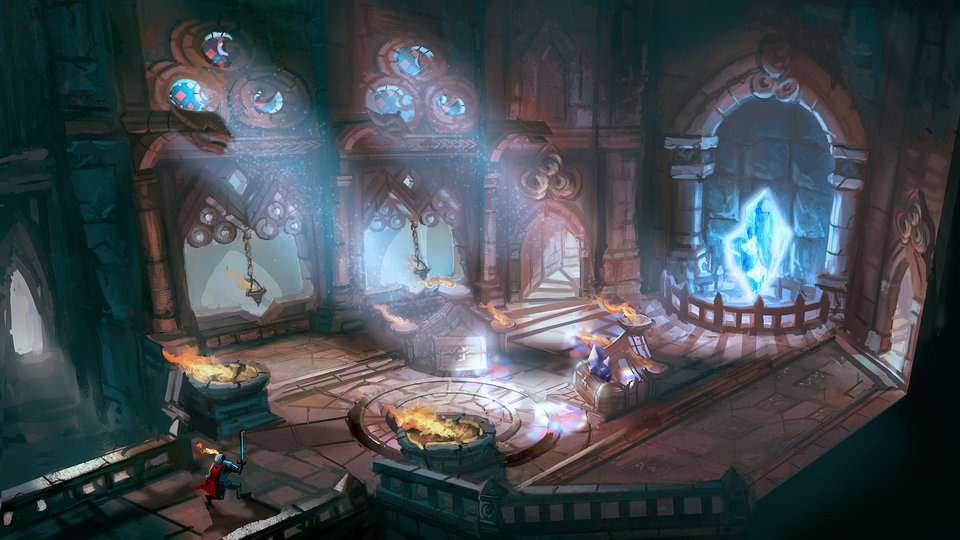 This game I need and not just because of it’s great title. With characters such as Sir Pain Hammer, Lance Goodthrust and Nigel the puking lizard, it just might be the new Bard’s Tale style game that I have been looking for. A free-to-play PC game it is set in a medievil style world where it is all about the money, bling, and status.

The trailer was hilarious and definitely not for kids.

South Park the Stick of Truth

The presentation opens with a fart to the face and the advice never to fart on anyone’s balls.

With that sage advice in the forefront of our thoughts (and nightmares) we learn that it has a new publisher and the game will be going ahead. In a holiday season but like Mirror’s Edge they declined to specify which one.

Expect all the usual South Parkiness with this game. I have to say I am looking forward to designing myself. Probably will be my favourite part of the game but I shall wait and see!

Here is my Crew

The trailer for the crew opened like a stereotypical racing game. There is a car, its components are coming together, racing police in the street, cars overturning etc.

But then you notice something different. The three cars are driving around like buddies. There are even GPS trackers following those cars. What does it mean?

Only that you can get together with your friends, in their cars, drive across the US and take down criminal organisations one city at a time!

Here is where The Crew really sets itself apart. It will be a different experience to Forza or Need for Speed. Here you explore the world, gain skill points and level up. You can explore the world alone or with friends.  Battle other Crews of real people. See something in the distance? Drive to it. The world is yours, for you and your crew.

Customisation you can strip the car right back and do your own thing. This is really something new and it may even tempt me to try it out, even though I am a menace behind a gaming wheel. What will you do with the power?

The basics are, you have a magic phone thing which can hack electronics. You receive information and can decide how to act on it. Will you be a vigilante? What time of justice will you deal out and how will it come back to bite you in the arse?

It is set in Chicago which makes me very happy, love the city, and it is edgy, dramatic and tense. I cannot wait to play this and start making decisions. Not looking forward to the consequences however.

Lightening the mood next came Just Dance 2014. Loud, colourful, and mental, the most up to date pop tunes will be available for you to shimmy and bop to. You can now have up to 6 player dances, there is an “on stage” mode, there are DJ moves, and you can shape the music with your body thrusts. Party masters can mix there own sound tracks.

One thing they did not say was if it would teach me how one is meant to dance to dubstep.

And we thought we had escaped! No, here those pesky Rabbids are. They were hiding out in a TV/game hybrid which will be shown on Nickelodeon. Yes that’s right, it has an interactive screen so kids can interact with the TV story.

It was a bit strange but younger children will love it and fair play for trying something new. I do still think shoving an egg back inside a chicken is a bit weird.

The incredible, expanding franchise Assassin’s Creed is back, now with Pirates. Just like all good things with pirates it was introduced with an assassination in the middle of a brawl in a seedy, dark tavern. Complete with wenches. Outside of taverns are some ships, the high seas, canon battles and fancy Spanish dandies.

This game isn’t just about killing people in different ways. It is open world so now you can hunt, fight, roam, explore and do general pirate things.  There are even lady pirates. Y’argh! This game is going to sell like crazy.

Trials Fusion and Trials Next Generation

When two wheels are better than four

For those of you who feel that cars have too many wheel and spend too much time on the road, Trials is the perfect game for you. In Trials motorbikes flip and fly through the air and land on trick ramps. Fusion is on the console while Nex Gen is on your portable devices. Hence the biker crashed out of the tv and through the phone in the video, clever eh?

Best thing about these two new games? They work together and complement each other. You can see your high scores, records and interact with the community across both.

But I do have to ask. Was fusion sponsored by Gillette?

This was Ubisoft’s big surprise! They just launched into this video telling us that society was unstable, that we would all cash diseases from money, and then people who die and order would break down. Nice.

Then came the game play. It was dark, tense and exciting. We could see that the four members of the team were chatting away to each other as they moved through the area. So yes this is an open world multi-player RPG. Players can even join in from their tablets and help you fight baddies. The cherry on this new, thrilling cake? You can bump into and fight other groups of players on the map. Now that is bad ass.

So overall a lot of good, fun games. Lots of mult-iplayer, open world RPGs. Slightly low on the female lead character score but we did see characters in Reyman and The Division.

Aisha Tyler was hilarious as ever as a host. I particularly liked her NSA comment when introducing Watch Dogs.

Another good idea was using hashtags to ask questions which the game devs would ask after the presentation. Nice bit of interaction to get the fans involved.

0 thoughts on “Ubisoft E3 Games of the Future”